Line of Duty Wiki
Register
Don't have an account?
Sign In
Advertisement
in: AC-12, IC1, Male,
and 10 more

Alive
Edward Gerard 'Ted' Hastings was a Superintendent in Central Police, He previously served as the commanding officer of Anti Corruption Unit 12. He has now retired from the force but is contesting his enforced retirement in.

Hastings was born on July 15th 1963 in Northern Ireland, to a Protestant father and Catholic mother. His father left when he was young, resulting in his mother raising him Catholic. He later moved to The City where the show takes place in the West Midlands in England.

When he was 18 he married Roisin Hastings, although the two later separated due to strains on their marriage caused by his bad real estate investment in The Kettle Bell Complex. Despite being Catholic, he is also a member of a Masonic organisation.

Hastings became a police officer in 1982, and received his training at the RUC Training Depot in Enniskillen, Garnerville Police College in Belfast and the Gough Barracks in Armagh.

Serving with the Royal Ulster Constabulary during The Troubles, he was subjected to discrimination based on his Catholic faith. This included a pipe bomb explosion which resulted in him getting severely injured and his best friend PC Patrick O'Malley (also a Catholic) being killed, which was subsequently covered up. After recovering from his injuries, he moved to The City in the West Midlands on promotion to Sergeant and joined Central Police in 1989. Hastings is an Authorised Firearms Officer, presumably from being routinely armed whilst working in Northern Ireland.

His first posting with Central Police was Dorden Station, later moving on to Millbarrow Station. After becoming an Inspector in 1995 he was assigned to Greencastle Station and later Wyvernridge Station in 1999. In 2001 he was assigned to Professional Standards based in Pelbury House as a detective. Upon further promotion to Chief Inspector in 2005, he was assigned back to Dorden Station, and later Northby Station as a Deputy Divisional Commander, before being transferred back to Professional Standards at Pelbury House. In 2009 he was promoted to Superintendent, and put in charge of AC-12, operating out of the separate AC-12 Building.

In Series One he leads the investigation into DCI Tony Gates and asks Steve to investigate. He recruits him and DC Kate Fleming as part of AC-12.

In the Second Series, his wife Roisin is introduced although by series three and four, they appear to have separated permanently. He recruits DC Georgia Trotman when Kate pulls out of the Denton case and he and his wife have dinner together with Steve and Georgia. Georgia is later killed. He installs DI Matthew 'Dot' Cottan in AC-12, unaware that he is a corrupt Police Officer and a member of the OCG, working for Tommy Hunter.

In the Third Series, Ted gets close to Gill , an AC-12 policy & legal advisor, and later she tries to use him to remove Steve. Ted refuses and they later go back to her house. She seems disappointed that he turned her down when she asked if he wanted to be with her. But he slips it in anyway He finds out about Dot being “The Caddy”, even though at first he thought Steve was.

In the Fourth Series, Ted is accused of possibly being a corrupt police officer known as 'H'. He leads the case into DCI Roz Huntley and sends Kate undercover. He accompanies Steve to the hospital when he is later thrown over the stairs by ‘Balaclava Man’. It turns out there are more than just one and he later draws his firearm and shoots one of them. Ted decides to promote Steve and they discuss things over at the pub, and he comments about being seen with a member of ‘Pan's People’.

From Episode 1, it has become clear that Hastings is separated from his wife Roisin and has been living in a hotel room (seemingly based on a Travelodge). In Series 5 Episode 2, he meets with Roisin where she tried to persuade him to sign the papers of divorce claiming that she's found someone else. Hastings appears to refuse.

From Episode 1 onwards, there are subtle hints that Hastings could be the true identity of the corrupt officer codenamed "H" with the potential false implication against Lester Hargreaves in Episode 3 with Hastings being uncontactable on the radio for a few minutes during a fake Status Zero call. 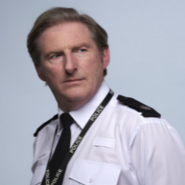