Line Of Duty Wiki
Register
Don't have an account?
Sign In
Advertisement
in: AC-12, Series 1 Characters, Series 2 Characters,
and 9 more

Arnott was born on the 23rd September 1985 to Mr and Mrs J Arnott. He speaks with a South East London accent, indicating he was not born in the Midlands where the show takes place.

In Series 3, he is shown living at Flat 5 Kingsgate Apartments in the Kingsgate area of The City. In Series 5, he relocates to Redman Road Apartments, also in the Kingsgate area. From Series 4 onwards, as a result of injuries sustained after being attacked by Robert Denmoor, he has ongoing pain issues with his back and is reliant on various prescriptions.

Arnott underwent training at Hendon Police College in London, and then joined Central Police in 2007. It is not specified as to whether he worked for the Metropolitan Police Service, which Hendon primarily train, prior to this.

After joining Central Police in 2007 he was stationed at Whiteburn Station, and later Southdell Station. In 2008 he passed the detectives course, and qualified as an Authorised Firearms Officer in 2009. In 2010 he was transferred to the Tactical Firearms Unit operating at Pelbury House, and was promoted to Sergeant in 2011. After his promotion, he was assigned to the Counter Terrorism Unit. In Series 6 it is also revealed he is a trained Taser officer.

DS Arnott was formerly attached to the Counter Terrorism Unit. During his time in CTU, Arnott was team leader into a raid of flat 56 Regal Court under the callsign Southern 156. Officers raided flat 59 in error as the 9 had fallen upside down therefore making it look like 56. DS Arnott transferred to Anti-Corruption Unit 12 (AC-12) after the shooting. Arnott's first case was an investigation into DCI Anthony Gates, attached to TO-20 at Kingsgate Station. Along with UCO DC Kate Fleming and SIO Supt. Ted Hastings, the team uncovered links to Organised Crime. DS Arnott was captured by the OCG with the help of DCI Gates and was tortured. Ultimately Gates had a change of heart and saved Arnott's life and AC-12 continued investigating. DCI Gates arrested high ranking OCG nominal John Thomas 'Tommy' Hunter before committing suicide via vehicle accident. Arnott reported that Gates died in the line of duty and his family received a death in service pension of £107,000.

During AC-12's investigation into DI Lindsay Denton, Arnott is accused of having inappropriate relations with Nurse Claire Tindall, a witness in the investigation into the murder of DC Georgia Trotman. After DC Kate Fleming's failed undercover operation, Arnott briefly goes undercover with Denton. When Fleming takes Denton to visit Edge Park Train Station, Arnott and a team of Forensic Investigators search Denton's home resulting into them discovering £50,000 in cash in Denton's late mother's overnight bag, This results in Denton being returned to custody.

During AC-12's investigation into PS Danny Waldron and the Victor Charlie Five Zero Team, Arnott's undercover operation with Lindsay Denton calls into question his professionalism and the relationships between Arnott and his live in girlfriend Sam, his work partner, Kate, and his boss Hastings are strained. After being suspended, Arnott is accused of being a gangland informant known as “The Caddy”, framed for the murder of DI Lindsay Denton by DI Matthew Cottan and is later arrested. He is cleared of all charges.

During AC-12's investigation into DCI Roz Huntley and Operation Trapdoor, Arnott is pushed down several flights of stairs by a man wearing a balaclava (later identified as Robert Denmoor) at the corporate offices of Webber & Barratt Partners LLP on the way to arrest Nick Huntley. He suffers serious injuries to his back and is admitted to hospital. He is questioned by Supt. Ted Hastings but is unable to identify his attacker. He is discharged from hospital but is initially in a wheelchair and then on crutches and struggles to look after himself before undergoing rehabilitation therapy.

During AC-12's investigation into undercover officer DS John Corbett and Operation Pear Tree, Arnott establishes a friendship with Corbett and develops him as a CHIS to gain information on the OCG, leading to the raids on Kingsgate Printing Services, Pulton House. Corbett also tells Steve about the planned raid on the Eastfield Depot. After his injuries in series 4, it is clear that Steve has a painkiller addiction. It seems Steve is trying to reestablish his relationship with DS Sam Railston, however this is unsuccessful. Arnott and DI Kate Fleming become suspicious of their boss, Supt. Ted Hastings after his unauthorised undercover operation with the OCG at Flicker Nightclub. Following this, Arnott and Fleming visit DCC Andrea Wise who orders an external investigation of Hastings by DCS Patricia Carmichael and AC-3.

After Kate Fleming's departure from AC-12 Arnott is assigned a new partner, DC Chloe Bishop. He also briefly rekindles a relationship with DI Nicola Rogerson before growing close to Stephanie Corbett, wife of the late John Corbett; Ted Hastings also appoints Steve as Detective Inspector as his investigation into Operation Lighthouse, led by DCI Joanne Davidson and DI Fleming, begins, and his painkiller addiction continues while his dependence on alcoholism to cope with the pain of his back injury after he did not fully recover from being thrown down the stairs in Series 4 is also introduced. It is also revealed that Philip Osborne, Arnott's former boss in Counter Terrorism, has become Chief Constable of Central Police and Ryan Pilkington, a juvenile criminal who almost cut Arnott's fingers off in Series 1, is now a serving police officer working on Operation Lighthouse.

Arnott confides in Stephanie Corbett about his struggles with addiction. He also conducts an illegal search of her attic, where he finds £50,000 in cash given to her by Ted Hastings. A routine drugs test detects high levels of analgesics in his system, and Arnott is called to attend an appointment with operational health which he repeatedly puts off. Eventually he attends an appointment after he is threatened with suspension from duty. Arnott is made to surrender his firearms and pursuit driving licence, but is not suspended from active duty. Despite being contacted by Stephanie Corbett, Arnott decides against seeing her for the time being as he does not see it progressing into a serious relationship. 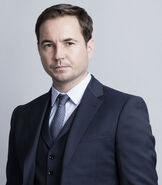 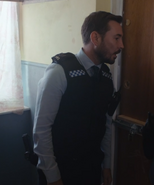 Arnott with stab vest and firearm during a raid of Pulton House (Series 5).

DI Arnott acting in his capacity as an AFO (Series 6).