Spoiler Warning: This article contains content relating to the plot and/or storyline

Series 5 premiered in March 2019 and saw AC-12 take down a vicious Organised Crime Group (OCG) and continue the hunt for the anonymous "H".

In series five, a plan was devised by corrupt police staff to rid them of meddling AC-12 for good. They would frame Ted Hastings as ‘H’, get him sent down, and have the team disbanded. To add insult to injury, they’d use Operation Pear Tree – an undercover op designed to discover whether or not there were institutional links between corrupt officers and organised crime – to do their dirty work. The audacity!

Senior Legal Counsel Gill Biggeloe (like bent series four solicitor Jimmy Lakewell), was a former defence lawyer whose association with the OCG presumably started when she represented one of them in court years earlier. Working for Central Police, she took bribes from by the OCG to make things go their way – redacting evidence and using her legal nous to disrupt investigations into their criminal activity and protect corrupt officers in their pay.

Tasked with taking down Hastings, Biggeloe was lucky enough to be able to exploit an event from Ted’s past. As an officer of the Royal Ulster Constabulary in 1980s Belfast, Hastings had developed a friendship with Anne-Marie McGillis, a CHIS (covert human intelligence source) who was providing the RUC with info on the IRA. When McGillis was discovered as a leak, she was kidnapped and killed, leaving her 10-year-old son John an orphan. John was adopted by relatives in Liverpool, took their name ‘Corbett’ and grew up to be an officer for Central Police.

Whether this was all Gill’s idea or the brainchild of a mystery senior corrupt officer with whom she was in cahoots, Gill covertly approached DS John Corbett before Operation Pear Tree was due to start. She lied to him that Ted Hastings was the bent copper responsible for his mother’s death, and had tipped off the IRA that Anne-Marie was an informant in order to quash rumours about the two of them having an affair. She then made sure Corbett was selected as the UCO for Operation Pear Tree, and continued to manipulate things to make it seem as though Hastings was ‘H’.

AC-12 was drawn into Corbett’s story when they investigated an armed ambush on a police convoy transporting heroin with a street value of £10 million. Led by Corbett and OCG member Lisa McQueen, the gang killed three police officers and injured one – PS Jane Cafferty. The investigation into Cafferty (who’d been blackmailed by the OCG into stopping the convoy to attend a diversionary car accident they’d set up) led them to stumble upon Operation Pear Tree, where they found that UCO John Corbett had lost contact with his handler and was on a one-man mission to uncover the identity of ‘H’ – who, thanks to Gill Biggeloe, he was convinced was Ted Hastings.

Cafferty wasn’t the only bent copper involved in the heroin ambush. The OCG had used the gambling debts of administrator Vihaan Malhotra to bribe him into passing on information that led to the attack. When his involvement was mooted at AC-12, his cousin PC Maneet Bindra (who’d previously passed on information to bent copper ACC Hilton in exchange for him pulling strings to help Vihaan not lose his job) covered it up. She was discovered, interviewed, served a red notice and suspended pending a full inquiry.

To try to make things right, the suspended Maneet conducted her own undercover op, making contact with the OCG and offering to pass them information, while secretly using a recording device. She’d planned to bring AC-12 vital information on the gang to prove her loyalty. Instead, John Corbett discovered her bug and, due to his hatred of bent coppers, had her killed.

Steve Arnott then tried to approach the OCG, and Corbett – recognising him as straight-up – started to pass him information on the gang’s activities and attempted to convince him that Hastings was H. Corbett set up OCG member Lee Banks by getting him to deliver bribe money to PS Cafferty while Steve was waiting to raid her home. AC-12 thus got Banks, who was taken to Blackthorn Prison, and learned that Cafferty had been blackmailed by DI Cottan into working for the OCG years earlier.

Corbett told Steve that the OCG was planning a raid on the Eastfield Depot, where ‘H’ would be unveiled. AC-12 set up surveillance on the depot, and, despite being distracted by a fake diversion by another bent officer, watched as DCS Lester Hargreaves arrived on scene, told the OCG about the trackers AC-12 had placed in the stolen goods, and was shot dead by John Corbett.  (Hargreaves was being blackmailed by the OCG, who’d retained the condoms he’d used when abusing an underage victim of their sexual trafficking, and were threatening to use them to plant his DNA on a dead body. A photograph of him leaving the ‘brothel’ was temporarily thought to be a picture of Ted Hastings.)

Corbett also told Steve how the OCG communicated with ‘H’, via a chat service on a laptop, which allowed AC-12 to intercept the communication and Hastings to pose as H to get info on the whereabouts of the stolen goods. All the way through, evidence was mounting to viewers that Ted could well have been ‘H’.

After Corbett shot Hargreaves, he went for broke, torturing Ted’s wife Roisin for information on her estranged husband. When Ted learned that Corbett was responsible for the attack on Roisin, he visited Lee Banks in Blackthorn prison, just for a chat, he maintains. Soon afterwards, Lisa McQueen learned from Banks that there was a rat in the OCG so she devised a plan to flush him out. McQueen set up a fake meeting with ‘H’ at a shopping centre, telling only John Corbett about the plan. When the police were there waiting for them, she knew Corbett was the rat and had OCG member Ryan slit his throat.

It didn’t help matters that Hastings went rogue after John Corbett’s disappearance, and enacted an unauthorised undercover op of his own. Posing as ‘H’, Hastings went to meet the OCG, to discover the whereabouts of £50 million worth of stolen goods they’d seized from the Eastfield depot. Luckily for him, Arnott and Fleming traced a phone used by an OCG member to Ted’s location, raided the gang and recovered the goods.

After Ted’s rogue mission, he was arrested on suspicion of being ‘H’ and interrogated by AC-3, who came very close to being able to charge him for conspiracy to murder.

How had Biggeloe framed Hastings? She used the life savings Ted lost investing in a failed Irish property development years before to make him susceptible to a bribe. A retired officer in the pay of the OCG approached Hastings, pretending to give him the chance to recover his losses and lending him the seed money to do it. That loan of £100k was actually dirty money easily traceable back to the OCG.

Gill also used her burner phone to contact the OCG when she visited Ted at his office, so any records uncovered would look as though he was the one contacting the gang. Then she had a second, more successful attempt at seducing him (he’d already turned her down once before), and in his hotel bathroom, took hairs from his comb that were later planted on John Corbett’s corpse, to make it seem as though Ted was involved in his murder.

Unbeknownst to Biggeloe though, Corbett had made an audio recording of their first meeting which would prove her downfall. At the last minute, Arnott and Fleming retrieved the secret recording from Corbett’s wife Stephanie, and used it to exonerate Hastings. Gill was arrested, took immunity and went into witness protection. Lisa McQueen gave evidence and took an immunity deal, but continued to protect the identity of active OCG member Ryan Pilkington, now a student police officer. Hastings was served with a final written warning for misconduct.

Of the £100k bribe money Ted was given by Moffatt, only £50k was recovered. The other £50k Ted gave to John Corbett’s widow, in an act that may have been morally just, but certainly wasn’t lawful. Ted Hastings continues to lead AC-12, but will he and his team ever fully recover from the aspersions cast on his integrity in series five? Series six will tell… 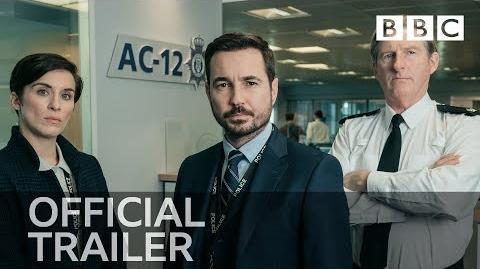