Series 2 saw Keeley Hawes take on the role of the main antagonist DI Lindsay Denton, who was the subject of AC-12′s latest anti-corruption investigation.

The storyline tied in with the end of series one, which saw DS Matthew Cottan unmasked as The Caddy and gangster Tommy Hunter taken into witness protection.

The series kicked off when a police convoy transporting a protected witness was the target of an armed attack. Three officers, including DS Jayne Akers, were killed, and the prisoner hospitalised, leaving DI Lindsay Denton as the only person to escape unscathed.

Immediately, Denton became a person of interest to AC-12, who believed she was an insider who had tipped the gunmen off about the convoy’s route.

After Denton was transferred to a different department while she was investigated, DC Kate Fleming went undercove as DC Kate Foster, working as a new member of her team.

During her time working alongside her, Fleming witnessed Denton making a call to the hospital where the witness was being treated. Suspecting something was up, Arnott and new AC-12 recruit Georgia Trotman raced to the hospital, but arrived to see an assailant disguised as a nurse kill the witness. DS Steve Arnott was knocked unconscious, and Georgia – the only person to see the nurse’s face –thrown out of a window.

After Denton blew Fleming’s cover, she was arrested on conspiracy to murder the witness. Maintaining she had called the witness to try and exonerate herself as a suspect in the convoy shooting, she then turned the tables on AC-12, highlighting their misgivings – including DS Steve Arnott’s history of sleeping with witnesses, Fleming’s affair with Jayne Akers’ husband, Richard Akers prior to her death, and Superintendent Ted Hastings’ recent financial problems, which she pointed out could have made him open to receiving bribes.

Despite this, she was remanded in custody, where she was attacked by her fellow prisoners.

AC-12 then discovered that the witness killed in hospital was none other than Tommy Hunter – the gang member who had Jackie Laverty murdered and was working with The Caddy (aka the corrupt DI Matthew ‘Dot’ Cottan) in series one.

This was then followed by the revelation that DS Akers had received a large sum of money before her death, confirming her as the corrupt officer who had tipped off the gang members.

When her husband Richard was brought in for questioning by Major Violent Crime officers DCS Lester Hargreaves and DS Nicola Rogerson, he led AC-12 to recordings of Tommy that Jayne had kept as leverage against him, in which he threatened to reveal the identity of The Caddy.

When Denton was later released from prison after raising concerns about DCC Mike Dryden’s activities – notably that he was the only person she told about the last-minute changes – he was also pictured in compromising situation with a 15-year-old girl, Carly Kirk, leading to his arrest.

Arnott then began working undercover to get close to Denton, and while at her house – where he also had sex with her – discovered a holdall of cash, confirming she received payment for her part in the convoy attack and that she was indeed corrupt.

Flashback scenes in the series finale then revealed Denton had realised Hunter was Carly’s pimp after catching her with DCC Dryden, and had wanted to protect her.

When DS Akers requested Denton’s help in handing Tommy Hunter over to his associates, she agreed to assist, believing she would be helping Carly escape her abuser. She was also motivated by the money involved to help pay for her sick mother’s nursing home bill.

However, what Denton did not realise is that the handover was being planned by The Caddy, whose real identity was only known to Akers and Hunter. It transpired Cottan ordered the attack on the convoy to stop Akers and Hunter revealing who he really was, and left Denton alive so she would take the blame.

The series finished with Denton being convicted of conspiracy to commit murder, and handed a life sentence. However, this was not the last we would see of her...

2008 - Dryden and Denton both work Crime Audit at Kingsgate station

9 August 2013 - Dryden gives a speech about his intention to clean up Witness Protection, and stop repugnant offender types getting deals

16 August 2013 - Dryden's wife is caught speeding on a camera, Dryden attends City Hall function, gets set up with Carly and calls Denton

28 August 2013 (approx) - Hunter makes a video threatening he's going to talk about everything if his immunity deal isn't sorted, releasing the info that the Caddy exists.

5 September 2013 - The Ambush on Tommy Hunter is carried out

14 September 2013 - Hunter is murdered at the hospital 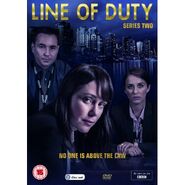