An Authorised Firearms Officer or AFO is a British police officer who has received training, and is authorised, to carry and use firearms.The designation is significant because in the United Kingdom most police officers do not routinely carry firearms.

The vast majority of AFO's in Central Police work in the Strategic Firearms Command unit, based out of South Ferry Station. Several detectives in AC-12 and other Criminal Investigation Department units have also been mentioned to be firearms qualified (as indicated by their personnel records), although they are not armed on a day-to-day basis.

Authorised Firearms Officers all have individual operational firearms licenses, that are often referred to and nicknamed "blue tickets" due to their size and colour. Permission for officers to carry firearms is granted by the Strategic Firearms Commander, and can be withdrawn in cases where the officer is under investigation or deemed unfit to carry.

When DI Lindsay Denton is examining the Central Police officer record of Superintendent Ted Hastings, it states that he has firearms training. This is due to the fact that Hastings previously worked for the Royal Ulster Constabulary, which along with its successor (the Police Service of Northern Ireland) is the only force in the UK to routinely arm all of its officers due to the increased risk of terrorist violence in Northern Ireland.

It is revealed that DC Kate Fleming is firearms trained, which allows her to be embedded undercover within the Strategic Firearms Command to investigate more closely Sgt. Danny Waldron.

After the death of Sgt. Danny Waldron, DS Steve Arnott uses his status as an AFO to check out a Glock 17 pistol from the armoury at South Ferry Station, carrying it in a shoulder holster when he attends Waldron's funeral. This is done due to the continued existing threat posed by members of the Organised Crime Syndicate towards Waldron and those associated with him.

However, Arnott makes the mistake of continuing to wear the sidearm in the AC-12 Building later that day after attending the funeral. Although he returns it to South Ferry Station, his actions cause DI Matthew Cottan and Gill Biggeloe to accuse him of breaching Section 7 of the Firearms Act 1968.

A very brief glance of the Central Police officer record of DCI Roz Huntley being looked at by DS Steve Arnott shows that she is trained and qualified to use firearms. However, throughout the series she is never once seen interacting with weapons.

Superintendent Ted Hastings is seen using his skills as an AFO during an attack on the AC-12 Building, in which he picks up an injured SFC officers Glock 17 sidearm and uses it to shoot and kill Robert Denmoor.

Due to the significant threat posed to AC-12 and the general public by rogue DS John Corbett, both DI Kate Fleming and DS Steve Arnott acquire authorisation to carry sidearms during certain operational activities that most plainclothes CID officers would not be afforded. They are seen armed with holstered Glock 17 pistols whilst accompanying members of the Strategic Firearms Command on a raid of Pulton House on the Borogrove Estate.

Fleming is also able to act as Tactical Firearms Commander when working with the Strategic Firearms Command due to her position as both an AFO and Inspector, doing so during the surveillance of the Eastfield Police Storage Facility.

Arnott later confronts DS John Corbett and draws his sidearm in an attempt to arrest him.

When Gill Biggeloe signals to the Organised Crime Syndicate that she needs to be broken out of the AC-12 Building when her treachery is discovered, both Fleming (still acting as Tactical Firearms Commander) and Arnott draw their sidearms on the AFO's outside the interview room and demand they drop their weapons, doing so as a precaution after corrupt DI Matthew Cottan was broken out of the building years prior by PC Lambert, who was also guarding the room.

DS Steve Arnott later also uses his pistol to shoot and injure Sergeant Tina Tranter of the East Midlands Constabulary when she attempts to murder Gill Biggeloe on the orders of the Organised Crime Syndicate. An epilogue states he was cleared of any wrongdoing when the shooting was investigated.

It is revealed that the Strategic Firearms Command also operates a small detachment of officers out of Hillside Lane Station. A small team of AFO's led by PS Briggs accompanying DCI Joanne Davidson and her team from Operation Lighthouse to effect an arrest, however are redirected by Davidson at the last minute to an armed robbery at Hickey's Bookmakers. When PC 4878 is forced to shoot one of the robbers when he refuses to drop his weapon, the entire unit is told to remain on scene for forensic recovery by the Forensic Unit. After over an hour, a second team of AFO's led by PS 5451 from South Ferry Station arrive to accompany the convoy as replacements. They later raid Flat 4F Beechwood House and arrest Terry Boyle.

A team of AFO's led by PS Ruby Jones provide security for a convoy organised by DI Steve Arnott to relocate Jimmy Lakewell from HMP Blackthorn to Decker Avenue Station. En route the convoy is attacked by members of the Organised Crime Group with heavy semi-automatic weapons. Jones is killed in the ambush, but the remaining armed officers including PC 8883 are able to neutralise the gunmen. During the operation, Arnott is also armed with a pistol, having been authorised to carry by the Strategic Firearms Commander due to the risks posed.

A team of several AFO's from Hillside Lane Station accompany DSU Joanne Davidson and her team during raids of three industrial estates, one of which is believed to be the site of a weapons workshop used by the Organised Crime Group. At the same time, the sites are also being monitored by AC-12 as part of their investigation into Davidson and Operation Lighthouse. DI Steve Arnott uses his status as an AFO to again get permission from the SFC to carry a sidearm on this operation. A pair of AFO's working for AC-12 later breach the groups workshop in White Rock Industrial Park, and are forced to shoot dead Lewis Polkard and Darren Morgan.

Due to the potential threat posed to her by PC Ryan Pilkington (an embedded member of the Organised Crime Group), DI Kate Fleming, who is also a trained AFO, is given permission from the Strategic Firearms Commander to carry a concealed weapon outside of work. She does not carry the weapon during work hours at Hillside Lane Station as to not tip off Pilkington or attract the attention of her colleagues in the Murder Investigation Team that she is working with AC-12 in secret. Pilkington was shot dead by Kate after holding her at gunpoint and refusing to surrender.

When he is put on medical monitoring due to high traces of painkillers found in his system, DI Steve Arnott is persuaded to voluntarily temporarily hand over his firearms license (referred to as a "blue ticket"), so the medical department does not need to go through the formality of requesting it be cancelled by the Strategic Firearms Commander. Due to this he instead carries an X26 Taser whilst intercepting an ambush by the Organised Crime Group with other AFO's.

DI Kate Fleming utilises her status as an AFO and arms herself during a planned interception of members of the Organised Crime Group as they attempt to hijack a prison transport believed to be transporting Joanne Davidson.

A large team of AFO's comprising of officers assigned to both Hillside Lane Station and AC-12 are seen escorting former DSU Ian Buckells into the AC-12 Building from HMP Blackthorn.

Brackley and other AFO's open fire on Karim Ali (Series 1).

An unnamed AFO stands guard at the site of the ambush (Series 2). 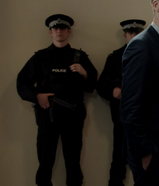 Unnamed AFO's stand guard over team VC5 as they wait to be questioned by AC-12 (Series 3).

An unnamed AFO stands guard outside a hospital room (Series 5).

A corrupt AFO is taken into custody by PS Kyle Ferringham's team (Series 5). 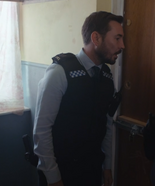 DS Steve Arnott carrying a sidearm whilst participating in a raid of Pulton House (Series 5).

DI Kate Fleming with a holstered sidearm during the raid on Pulton House (Series 5).

A team of AFO's escort Superintendent Ted Hastings to the AC-12 Building (Series 5).

DS Arnott and DI Fleming draw their sidearms on Carmichael's AFO's as a precaution (Series 5). 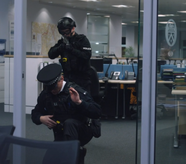 An AFO under the command of CSU Carmichael is disarmed by a member of PS Kyle Ferringham's team (Series 5).

DI Steve Arnott aims his sidearm during an ambush (Series 6). 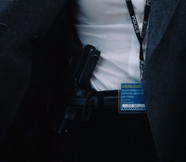 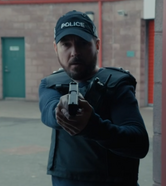 DI Steve Arnott participates in a raid whilst armed (Series 6).

DI Fleming and DI Arnott aim their sidearms at members of the OCG (Series 6).
Community content is available under CC-BY-SA unless otherwise noted.
Advertisement