Line of Duty Wiki
Register
Don't have an account?
Sign In
Advertisement
in: Deceased, Series 1 Characters, Central Police,
and 3 more

Committed suicide via traffic collision
Anthony "Tony" Gates was a Detective Chief Inspector in Central Police and the main subject of investigation in Series 1. He led the serious crime unit TO-20.

Gates was born the 18th May 1975. At some point in the 1990's, Gates became romantically involved with Jackie Laverty, and the two later became engaged. However, she broke off the engagement and instead married Andrew Laverty, a wealthy businessman. In 2002, Gates married Jools Gates, and had two daughters; Natalie and Chloe.

Gates joined the police in 1995 and was trained at Hendon Police College alongside Nigel Morton. However, whether he served with the Metropolitan Police (who Hendon mainly trains) before joining Central Police is not mentioned. During his training he also obtained an Advanced Driving Certification and underwent training as an Authorised Firearms Officer.

Moving up in the ranks within Central Police, he later became the leader of the TO-20 unit prior to the events of the first series.

Gates is introduced driving to the Sunflower Cafe to meet with Jackie Laverty for breakfast. Talking on his phone whilst driving, he is clear to avoid a marked police car. Whilst he and Jackie are having breakfast in Kingsgate, he observes three men attempting to mug a young mother outside the cafe. Racing in to stop, he disarms one attacker armed with a knife and holds him, and knocks down the other two, who later run away. Waitress Nadzia Wojcik then tells him that his breakfast is on the house.

His actions, combined with other successes from the TO-20 unit he heads, lead Gates to be awarded the Officer of the Year Award by Chief Constable Edward Thomas. It is this that prompts Superintendent Ted Hastings to suspect his numbers are too good to be true, and opens up an investigation into him regarding laddering.

Gates arrives at the Edge Park Golf Club, and confronts Tommy Hunter. After punching him in the stomach and getting his associates to back off by flashing his Warrant Card, Gates handcuffs Hunter into his car and drives away. Covertly recording their conversation, and relaying it to DS Steve Arnott and DC Kate Fleming, he attempts to get Hunter to confess and reveal his culpability in the murder of Jackie Laverty. Hunter refuses to make any confessional statements, but becomes concerned when Gates tells him that TO-20 has uncovered "new evidence". Gates reveals that they have been able to link the murder of Wesley Duke and the Arab drug dealers on Greek Lane to Hunter. However, pretending he still wants to be of use to Hunter, he says he will be able to dress it up as a lower level feud between dealers if Hunter instructs one of his men to confess and take the fall. Otherwise Hunter himself can be linked to a triple murder. In exchange, Gates wants Jackie Laverty's body disappeared, so his DNA traces cannot be found on her. After some back and forth, Hunter angrily tells Gates what he wants to hear and that the men were "killed on his orders". This is caught on tape, implicating Hunter and satisfying AC-12.

Hunter refuses to go along with Gates' suggestion, noting that Jackie's body is his only leverage. He instructs Gates to turn around and take him back to Edge Park Golf Club. Knowing he is stuck either way, Gates stops the car in the middle of traffic and formally arrests Hunter for the murder of Wesley Duke, which he just confessed on tape and the murder of Laverty. Leaving Hunter handcuffed in the car, he turns him over to AC-12 detectives DS Steve Arnott and DC Kate Fleming who were following close behind. Whilst Fleming goes to further detain Hunter, Arnott urges Gates to run as "we got him". Gates knows that he is will be arrested and dismissed from Central Police regardless, which will leave his family with nothing. After assuring Arnott he was "never bent", Gates commits suicide by walking into the path of an oncoming truck.

Arnott later tells Superintendent Ted Hastings and Chief Superintendent Derek Hilton that Gates was in the process of chasing a suspect when he was hit by the truck, thus rendering his death to be "in the line of duty". As a result of him dying as an active service police officer, his family (Jools Gates, Chloe Gates and Natalie Gates) receive both a Death In Service Benefit of £107,000 as well as Gates' pension for life. The AC-12 investigation into Gates is discontinued, and the TO-20 group disbanded. His evidence obtained against Hunter is never used, as the crime boss negotiates with Central Police (with the assistance of his mole in the force DI Matthew Cottan) for immunity from prosecution in exchange for information on his associates in the Organised Crime Group.

After the body of Jackie Laverty is found alongside the body of DS John Corbett, Gates' personnel record is later brought up during the AC-3 interview of Superintendent Ted Hastings.

Whilst searching through the Central Police Portal, DI Steve Arnott and DI Kate Fleming view Gates' profile as part of the AC-12 case records whilst trying to ascertain the background of Ryan Pilkington. 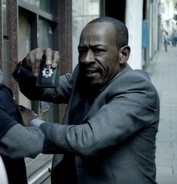 DCI Gates shows his warrant card to a passer by (Series 1).